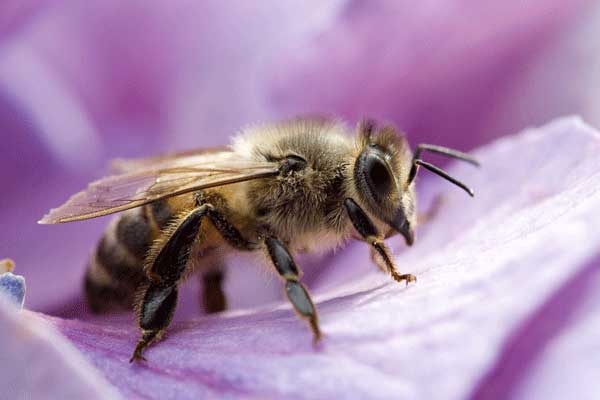 Before you wonder why we discuss how to get rid of bees, we must learn what are the special circumstances that warrant bee repelling. If you have a beehive in your yard and the bees are not bothering anyone, it is best to leave them alone. It can take years for bee colonies to rebuild from being destroyed or removed by humans – that’s right! We destroy their home then wonder why they sting us.

How Dangerous Are Bees and Why Should We Repel Them?

Bees are an important part of the ecosystem that have garnered much attention in the media. As we all know, bee populations are declining, posing a threat to our entire ecosystem and life itself.

While protecting them is important, this does not mean you should share your living space with them.

Before choosing a method of removing a colony of bees, it is important to identify the species of stinging insect, and whether it is a bee, wasp, or hornet. This knowledge will give you a better estimate of damages or the threat of stings. Some species also require specialized treatment.

How To Treat A Sting From Bees:

A bee sting can happen quickly and without warning. One minute your children are playing outside happily, the next a piercing scream reveals one of them has been stung by an angry wasp or hornet – who just wants some attention!

To help alleviate panic (and pain), it’s important to know what you should be doing when treating bees in order avoid infection from their venomous barbs.

The first thing that comes into play is getting out any remaining stinger as soon as possible so more poison doesn’t get pumped into our skin longer than necessary; this will also reduce swelling around where it is stuck… But if we’re lucky enough not receive another attack then there are still plenty of ways to prevent these pesky bugs wreaking havoc on ourselves again at home.

A Bee sting allergy is a rare condition, but it’s one that could be life-threatening to those who are allergic. Symptoms of anaphylaxis can include difficulty breathing and swelling around the mouth or Nose; if someone with milder reactions has experienced multiple stings without seeking medical attention they should still contact their doctor for advice on how best handle any future encounters with bees.

A person’s reaction may also vary depending upon factors like age: children under 12 years old typically have less severe symptoms than adults do when reacting after being stung by this type insect . If you notice signs such as these—even just once!–seek professional help right away! 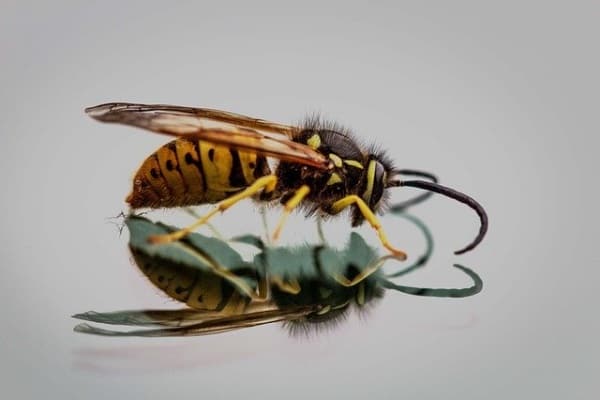 Wasps resemble bees, but are more aggressive. They can also sting multiple times. Wasp nests are usually aerial and can be found hanging from a tree or building. Wasp colonies die at the end of summer, but common wasp species will form new ones each spring which can last for up to seven years.

Wasp nests resemble a gray, papery material with many holes in it. They are often found hanging off of eaves or branches but can also be located on the ground. If you find one while gardening, do not disturb it! Wasps have been known to attack when their nest is disturbed so keep your distance

How To Treat A Wasp Sting:

Stings from wasps can be a painful problem, but most of them only sting when disturbed or irritated. The common species includes yellow jackets and hornets with many different reasons for stinging you such as nest-building in your home (if they are nesting), food stealing behavior due to hunger pangs , defending their young against predators like birds who might consider raiding the colony’s provisions without any competition; robbing humans looking for honey stores which often contain tasty bits that insects enjoy eating too!

In addition some kinds may have more than one motivation – think bees who also hunt other small invertebrates.

Wasp stings can be painful, but they’ll mainly cause minor discomfort after the initial sting. Common symptoms include pain in your area and swelling that extends out from where you were bitten/stung. Some people may experience itching or heat at the site of their encounter with wasps as well!

If you’ve been stung by a wasp, it’s not likely that the site of pain is an indication for concern. If your venomous encounter involves any part on your body other than the mouth (for example nose or throat), then be sure to seek medical attention immediately as this may indicate life-threatening complications associated with Wasp Venom Antidote Test Kits which can quickly alleviate suffering caused from these types of stings! Now let’s take a look at some home remedies and treatments:

The most effective way in relieving tissue damage following such events would have two parts; prevention through wearing protective gloves while working outdoors where predictably high levels occur AND treatment using antihistamines like Benadryl PMD ® particularly if symptoms worse.

When to See a Doctor:
When you get stung by a wasp, the pain and swelling should go away after 1-2 days. If this doesn’t happen or if your symptoms are persistent over several days instead of getting worse then it may be because there is an infection (which would require medical attention). An allergic reaction can cause even more harm than just minor discomfort from these types of insect bites so don’t ignore any signs!

How to Get Rid of Bees Infestations

Human structures often prove attractive to bees, as their natural tendency is to build their hives in tree hollows and similar cavities. In the event that a colony of bees has taken up residence in your home, yard, or vehicle, there are steps you can take to get rid of them.

As they are diurnal (active during the day), it is best to deal with hives after dark.

Let’s see now how to get rid of bees depending on the infestation location!

How to Get Rid of Bees in the House

Dealing with a colony of bees living in your home may be easy or difficult, depending on whether the hive is exposed.

How to Get Rid of Bees in the Ground

A simple method for eliminating a ground bee problem is to purchase a chemical spray specifically labelled for these bees (we recommend Spectracide).

Bees on the ground are a species of yellow jacket and can become aggressive when agitated, so be sure to dress protectively and spray at night.

How to Get Rid of Bees in Your Car

Eliminating bees or wasps from a car is often difficult, depending upon the location of the nest.

How to Get Rid of Beehives Around the House 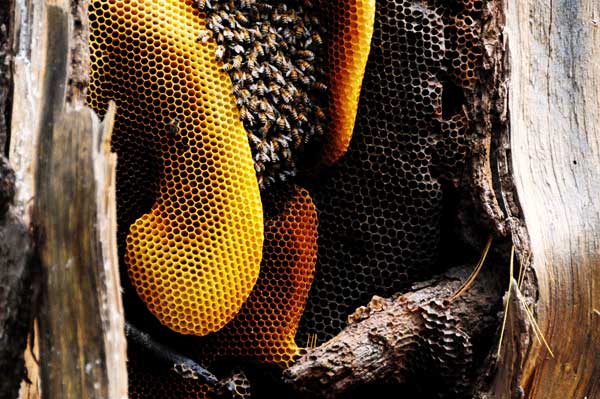 It is important to remove a hive after killing the bee colony. Not only does this eliminate dead larvae which will decay and stink, but it will also help prevent any new colonies moving into the abandoned hive.

Removing a wasp nest is different than removing bee hives, so knowing which stinging insect you are dealing with will aid in the removal process.

For all species of bees, the methods of removal are all similar.

Wasp species nests, such as the paper wasp (flat with a visible comb), hornet (teardrop and usually hanging from a tree), and yellow jacket (unevenly-shaped or in the ground) can be dangerous to remove.

Be sure that you have eliminated the colony and wear protective clothing in case you encounter a survivor.

Regardless of the species, hives built inside of a tree hollow or other enclosed space outside of your home will prove difficult to remove.

How to Get Rid of Bees Naturally 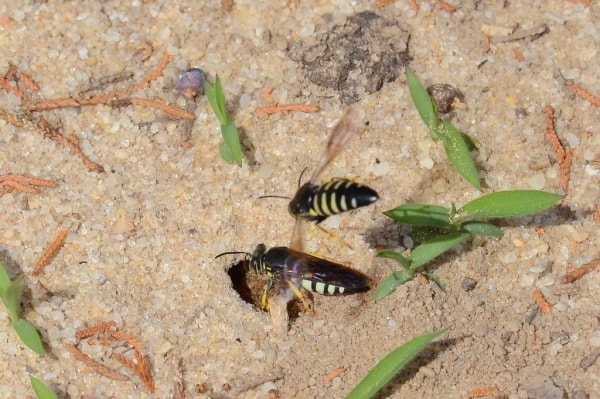 There are several natural methods to help remove an unwanted colony of bees.

It should be once again noted that you should make every effort to relocate honey bees instead of exterminating them.

Bees will often relocate to be closer to their food source and are attracted to strong, sweet smells.

A more lethal form of lure is to fill a basin with sugar water and place it where the bees congregate. The bees will be attracted to the water and drown. 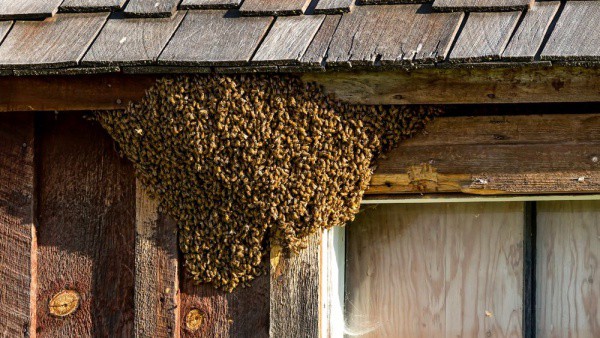 While bees are attracted to sweet smells, they are equally repulsed by pungent smells.

Citronella candles will not harm bees, but it will help repel bees they will avoid any areas containing the smell. This helps protect some areas if you have a hive in your yard, and may prove partially effective in forcing a colony to relocate if you burn the candles close to the hive.

Scatter a handful of cucumber peels as another natural form of repellent.

Add one teaspoon of vinegar or canola oil to a quart of water and place in a spray bottle.

Food-grade diatomaceous earth is an organic pesticide which is comprised of ground diatom shells.

There are a few ways to deal with these bees.

The first is to pour boiling water into the hive entrance at night. The water will kill bees on contact. This will not affect bees that are away from the hive, however.

Using a large, clear jar is another method to eliminate Bees from the ground

The heat from direct sunlight will have some effect, but the primary effect is to prevent the bees from having access to food or water. 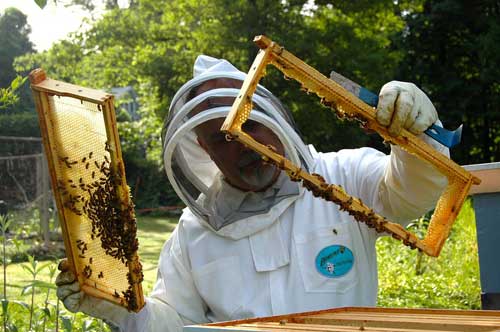 Unlike most other types of pests, there are two different types of bee professionals to choose from.

What to Expect from Professional Pest Control When Working with Bees

Your local beekeeper may or may not offer a removal service. In the event your stinging insects are a species of beneficial bees, they will use a bait trap to coax the colony into a box hive and then relocate that colony.

In the case of a hive in the walls of your house, a beekeeper may opt for extermination or decline the job. Fewer beekeepers are providing this service for species other than honey bees.

How Much Does Bee Removal Cost?

If a beekeeper is available, they may offer to relocate the bees at no cost or for the price of the trip, but only if the colony is healthy.

In the event you need to open a wall to remove a hive, there may be additional repair costs. Some companies will do this for $300 to $900. However, not all removal companies offer this service, requiring you to pay another company for the repairs.

To save the greatest amount of money, identify the type of bee or wasp.

Honeybee Swarm Removal is a national directory of beekeepers which provide removal services.

FAQs Regarding Getting Rid of Bees

How do I get rid of bees naturally?

Some of the most efficient natural repellents are:
1. Bee lure that helps with relocation;
2. Garlic powder;
3. Citronella;
4. Cucumber;
5. Vinegar;
6. Food-grade diatomaceous earth

How do I get rid of ground bees?

How do I get rid of carpenter bees?

Carpenter bees are also effective pollinators, so you should remove/repel them instead of killing them. Just like most bees, they do not suffer pungent smells, so you can try vinegar, citrus, and even almond oil mixtures.

Who do you call to remove bees?

You can call a professional exterminator or you can enroll the services of a local beekeeper. The former will mostly deal with the harmful species of bees and use chemicals to get rid of them. The latter will most likely employ relocation techniques.