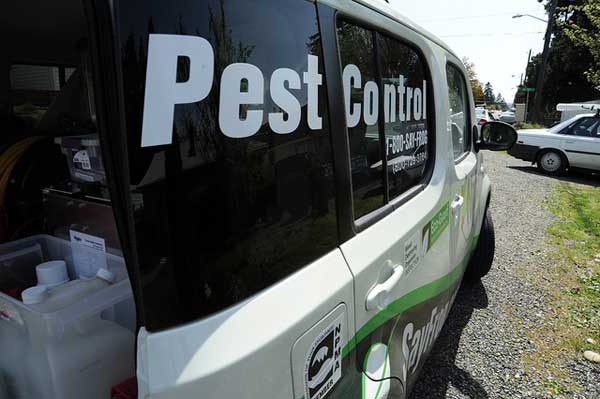 Whether your problems are with rodents, insects, or even geese, sometimes the best option is to hire an exterminator or professional removal expert. Exterminators specialize in insects and occasionally rodents. Meanwhile larger pests such as bats or geese must be captured and removed alive, when possible. As costs vary greatly from one species to another, it is important to know your options.

From mice to raccoons, larger pests tend to pose special health risks that make poisoning a poor choice. These animals may die within your walls, creating a nasty smell and breeding harmful bacteria. Furthermore, the risk of diseases such as rabies often make it dangerous to handle these creatures on your own. State or county laws may also protect bats and certain other species, making it illegal to remove the pests unless certified.

The primary task of an exterminator during inspections for large pests is assessing the invading population. Pricing and removal methods may vary greatly depending upon the numbers. Furthermore, they are to identify and seal possible entry points during the removal process. Depending upon the pest, the exterminator may also give advice regarding potential health hazards or damage the infestation caused. The cost for an inspection varies based upon the species. It may not be necessary if the intruders are under a deck or otherwise in an isolated area.

When it comes to larger pests, the most common method of removal is exclusion. During this process, the removal expert will identify and seal off all entry points, save one. They then add a one-way exclusion device to the primary entry point. This allows the pests to exit but not return.

One example of an animal which requires exclusion is the bat. Bats carry a risk of rabies and are vital to the ecosystem, making exclusion the only viable option. Prices range according to colony size and may become quite expensive. While some removal specialists might charge less, be prepared to pay the following:

Other pests, such as rats or mice, are usually trapped and relocated. Entry points are sealed and traps are set in high activity points throughout your home. While kill traps are becoming less common, some exterminators may still employ them. The cost between kill traps and live trapping is negligible, although live traps tend to be safer and more popular.

Mice are the most common candidate for trapping, and will cost between $40 and $300 or the extermination/removal itself. Exclusion is sometimes used in conjunction with traps to relocate skunks, raccoons, and other large outdoor invaders.

The aftermath of eliminating pests can be full of additional costs. If you caught the infestation early on, there may be little or no repair beyond the cost of sealing potential entry points. However, larger or long-term infestations may cause extensive damage to your home. Some of these hidden costs include:

Unlike larger pests, insects quickly multiply and can only be eliminated through extermination. Home remedies are generally ineffective. In addition, insecticides have increasingly limited effect as species become more resistant. In most cases, hiring an exterminator is the only viable option.

When inspecting for insects, the keywords are identification and numbers. Some pests, such as bedbugs, are very similar to other common insects that are less harmful. This makes it important to identify a species based upon more than a sighting. Stinging insects are also a good example of why it is important to identify, as different species require specific techniques for removal.

Even after confirming the invasive species, the exterminator needs to identify the number present. This is a difficult process, as any species, such as termites, dwell in hard-to-reach places or hidden within furniture and small cracks. In many cases, identifying the number of insects will play a role in which methods of extermination will be available to you.

In the event of a potential bedbug infestation, your exterminator may offer the option of a canine inspection. Specially trained dogs are led through the bedroom and any other areas where sightings have occurred. While this form of inspection has a reportedly high accuracy rate, availability is limited.

In some cases, insects require special treatment. The most common of these are bees, which are protected in many states. If the colony is in good health, a local beekeeper will often remove the bees at no cost. Beekeepers may charge a fee ranging from $75 to $250 for hives which have been exposed to insecticides or are otherwise in poor health. This fee also applies to wasp nests. In cases where the nest or hive is located inside of walls, the cost increases dramatically to $700 or more. Exterminator fees tend to be slightly higher, although some companies will also repair damage or an additional $300-500.

Choosing an extermination based upon price may not be your best option. Each method has its own drawbacks, and some options may not be available in your area. In addition, extermination is largely restricted to insects.

Often considered the last resort for termites, fumigation requires the home to be covered in tarpaulin. With gas fumigation, vikane gas is pumped into the home, killing everything. This method requires extensive preparation and you must vacate the home for several days.

An alternative method is the use of heat. This method is nontoxic and may be restricted to certain rooms. Unfortunately, it is not widely available and requires all heat-sensitive items to be removed from the treatment areas.

When dealing with termites, options exist in which liquids are poured into termite galleries. This requires the exterminator to drill multiple holes into the infected wood. Then, either liquid nitrogen or orange oil is injected into the holes, killing termites on contact. Likewise, a few exterminators may use an electro-gun and microwave system to send 180,000 volts through the galleries. Drilling methods require precise detection and are not widely available.

Once the mainstay for exterminators, pesticides are becoming less popular as resistance grows. Bait traps remain common for cockroaches and ants, while some insecticides may be used to help control termites using chemical barriers. Mice may also be killed using pesticides, although live traps are safer and often more effective.

Poisons and insecticides are becoming less common due to a growing resistance worldwide. Instead, innovative methods such as heat treatment are becoming the norm. Some of these new techniques are quick, while a few may require you to vacate your home for several days. The following comparison chart lists many common extermination methods, although some of these methods may not be available in your area.

As a final note, it is important to shop around when searching for an exterminator. Some will recommend a specific treatment based upon preference over effect. Prices will vary, and many companies will offer a warranty for their services. Be sure to check any fine print before signing a contract.

Meanwhile, choosing a good pest removal expert or problems with larger pests is also important. Many species, such as geese and bats are protected and must be removed by trained professionals. In addition, some experts may offer advice on preventing future incursions or additional services. While not listed as removal experts, your local beekeeper will often provide free or cheap bee removal services.