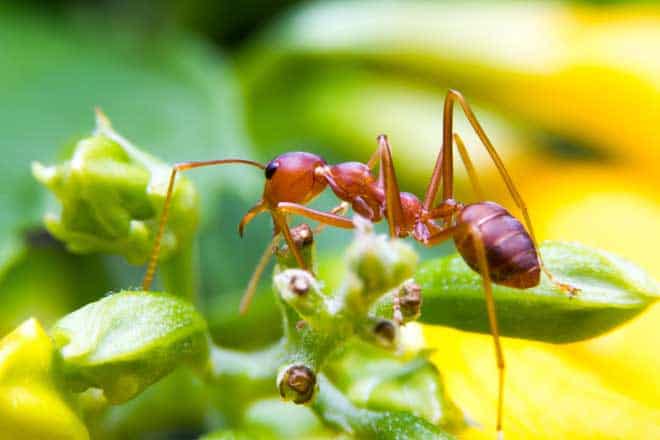 Fire ants are pests that are not only an inconvenience, but can be harmful as well as potentially fatal to both humans and animals. Most people put them at the top of their list of invasive pests. It is estimated that Americans spend $6 billion annually to get rid of them, including the price of insecticides.

There are several ways to eradicate them, using a variety of methods. Prevention and management are also keys to ensuring the minimization of these pests. 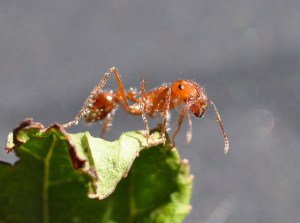 There are several species of fire ants, but imported black and red fire ants are among the most invasive and harmful. Adult fire ants are distinguishable from other local ants by their copper brown colored head, and their darker abdomen. The worker ants range in color from reddish to blackish, and are anywhere from .08″ to .24″ in size.

A typical fire ant colony consists of the queen, soldier ants, and worker ants. The queen is the largest and is responsible for reproducing. She can produce up to 1,600 eggs per day. The queen’s lifespan ranges from 5 to 7 years. They start out with wings, but rip them off after mating. One colony can have up to 250,000 workers.

Soldier ants are generally larger than worker ants, and have more powerful mandibles. Worker ants are responsible for everyday tasks such as protecting the eggs and larvae, finding food, and cleaning the nest.

Fire ants will nest in several areas and feed largely on plants and seeds, although they will often attack small animals, which is usually fatal for the animals. They are known to be more aggressive than other ant species and have pushed other local species away from their natural habitat. Unlike other ant species, they can survive extreme temperature conditions and do not hibernate.

Most nest locations are found in moist soil conditions such as pond shores, river banks, highway shoulders and watered lawns. Their preferable nesting location is one that is not easily visible, such as under concrete objects like timber, bricks, or rocks. Sometimes, they will build mounds in open fields. These, of course, are quite visible, and can be as large as 15″. Large fields can contain as many as 300 mounds per acre. These can damage equipment such as mowers and small tractors.

Colonies can consist of one queen, or several queens. It is not uncommon for one or more queen to die off, although some colonies remain polygamous. Even with only one queen, a colony can grow to more than 250,000.

As with many insect infestations, the key to eradication is prevention. However, this is extremely difficult and preventing fire ants from invading your property or building can be next to impossible. The next best thing is to identify them as early as possible, and take the necessary steps to get rid of them.

Many people work to control fire ants by treating each mound individually; this can be time consuming and costly, though, if you have a lot of area to cover, and a lot of mounds to treat. On average, each mound can cost $2 to treat with insecticides. There is also a risk of using too much insecticide, which can make its way into nearby rivers and streams, causing environmental damage.

Rather than treating each mound individually, a broadcast method, which treats entire yard areas, are much more effective.

The method of treatment and control that you choose depends on your tolerance level, your environmental impact concern and your financial resources. Some people choose to do nothing about the ants, because they don’t seem to pose any problem or threat. Most people, however, choose to attempt to get rid of them by any means possible.

Some methods include biological control and use of insecticides. Each method is effective, but will depend on specific location and environment concerns involved.

How to Kill Fire Ants

In order to be effective, any eradication method must kill the queen; otherwise, the colony will survive, and will build back up again. Deep-dwelling colonies that have gone undetected can quickly build up after a soaking rain.

Some people say it’s impossible to get rid of fire ants completely; others lament the fact that with ongoing control methods, they can be managed and rendered nonthreatening.

Organic or chemical methods of killing fire ants take time, skill and caution. If you have a large area to manage, it may be best to call a professional. These experts are trained and come prepared for any scenario. Fire ants can emerge from their nests quickly and can overwhelm in a matter of seconds. If you are not prepared, painful stings and bites can occur. 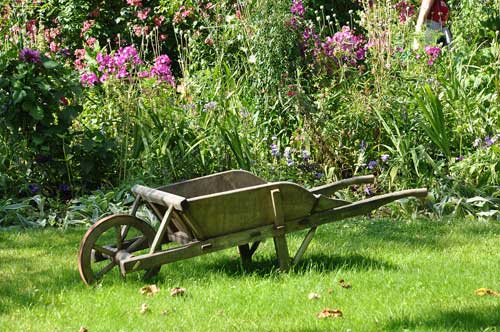 In order to use an insecticide in your yard or garden, you need to read the label carefully. Some products can be extremely lethal to all insects, plants and animals, and should not be used around areas used for human consumption (vegetable gardens) or around household pets.

Organic and natural methods include pouring hot water on the mound and surrounding areas; molasses, club soda, and instant grits are home remedies that work to varying degrees, but are not considered to be truly effective methods.

Get Rid of Fire Ants Naturally

If you are concerned with the environmental impact of using chemicals and insecticides, there are natural and organic alternatives to getting rid of fire ants.

As discussed, hot water can be an effective way of getting rid of fire ants. Studies have shown, however, that this only works about 60% of the time.

The area affected must be monitored on a continual basis, to ensure that colonies are not re-forming, and new mounds are not appearing.

There are several different management control methods, including biological, organic and insecticide.

The two-step method of fire ant control is among the most popular and most effective. As the name suggests, there are two steps involved.

The individual treatments provide quick eradication of the insects and are used for areas that are heavily infested. The broadcast bait allows for slower, longer lasting treatment and covers a wider area. 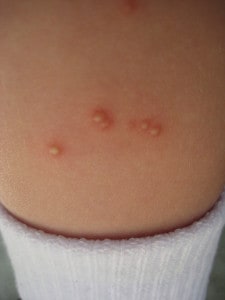 Most humans experience the bite of a fire ant because they’ve inadvertently disturbed a colony/mound. Regardless of the reason, they can emerge from their nest and attack quickly, especially if they are agitated.

Fire ants inject a substance known as an alkaloid venom with their sting. They also have large mandibles used for biting. They attack humans as well as animals of all sizes, from small birds to rabbits to farm cattle. Their bites can be fatal to both humans and animals.

Fire ants bite just to get a grip on their prey, then inject their venom into the wound. For humans, these bites will feel similar to that of a burn, (hence the name fire ant!). Small, red welts will appear on the skin, and clear blisters will form a few hours later. These bites cause itching, swelling and redness and can be extremely uncomfortable.

Bites should be treated as soon as possible, and it’s important to get the fire ants off of you immediately. Once they’ve bitten into the skin or onto clothing, they have a firm grip. You may have to actually pick them off. Trying to slap them off will just irritate them.

The steps to treating a fire ant bite include the following:

Home remedies for fire ant bites include hand sanitizer (this is a popular method with Florida golfers,) ice packs, and a water and baking soda paste.

If the affected area does not seem to improve over a few days, or if pain persists, see a medical professional for further treatment.

While it’s rare for people to become allergic to fire ant stings, it does happen.

Allergic reactions can include the following symptoms:

If you experience any of these symptoms, seek medical attention immediately.

Stings and bites can be fatal if an allergic reaction goes untreated, or in those who are extremely sensitive.

Fire ants are attracted to pet food and can quickly overwhelm a food bowl, making it difficult for pets to eat. The ants will typically bite/sting in areas that contain the least amount of fur, such as the eyes, ears, muzzle and abdomen.

Never attempt ant eradication off of a pet with a garden hose, as this can agitate them, causing them to sting repeatedly. Many stings will require the intervention of a veterinarian, as they can cause an animal to be extremely uncomfortable.

Before devising a plan to eradicate fire ants, it’s important to properly identify them. Some species of ants are actually considered beneficial and will toil the earth just as good, if not better, than an earthworm. They can also eat other insects which are considered to be harmful. If you’re unsure, it’s best to call a professional for positive identification.

Whether you choose a chemical or organic approach to killing fire ants will depend on a number of factors, including budget, size of the area to be treated and extent of the damage that has occurred, or may occur as a result of the ants.

The key to successfully getting rid of fire ants is to identify them as quickly as possible, and take action as soon as possible. Knowing all of your options will help minimize damage and protect both animals and humans on the property.