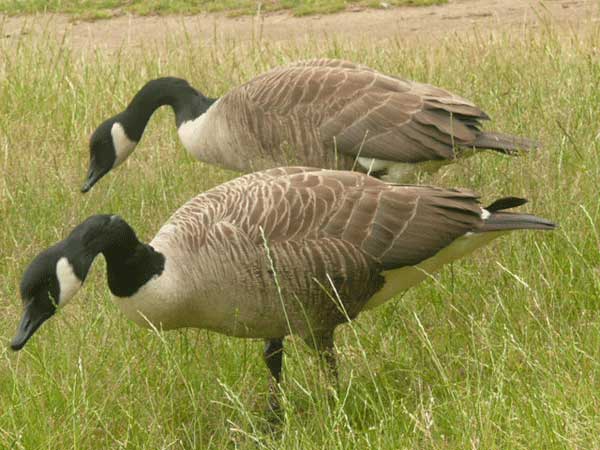 Geese are a common sight during the migration season. These large birds fly in a signature delta, or V-shaped, formation to reduce air resistance. As they travel, they often stop near bodies of water to rest and find food. While considered attractive, these stopovers and potential nesting can cause numerous issues for landowners. Flocks of geese are known as gangs.

Canadian geese are not dangerous, although they are considered a nuisance. There are a few common issues associated with an infestation:

Getting Rid of Geese

Getting rid of a gang of geese is often a simple matter of scaring them away. There are several methods of doing so, although different tactics may be required if a goose has managed to find its way into your home. Likewise, a single goose may be much easier to handle than a gang. If attempting to capture a goose, be sure to make sure it is legal in your state to do so.

Removing a Single Goose from Your Home

If a single goose strays onto your property or into your home, it is not difficult to neutralize and remove it. Approach the goose slowly, being careful not to startle it. A goose will rear up, flapping its wings and hissing if it is about to attack, so watch for these warning signs and back away if you see them. Once in range of the bird, throw a sheet or large towel over it. The goose will become more docile once it is blinded, and you can safely transport it to an animal shelter or a location where it may be released.

An alternative method is to get strong, sturdy wire and make a loop. Tie a pillowcase to the loop and then attach your makeshift net to a pole. You can use this simple device to capture the goose from a slightly further distance.

Geese that are nesting can be a lot more aggressive and may not permit you to approach them. However, they are afraid of sudden loud noises which might indicate danger. Firing a hunting rifle, using an air horn, or using some other method to produce an unexpected noise may be enough to drive the geese away.

Another factor that makes sudden noises work is the fact that geese prefer a stable environment. Sudden, unexpected changes in the environment such as the aforementioned noises will often scare birds away before they have begun nesting. Be warned: if the geese are already nesting, the males will stand guard while the females flee with their chicks into the water. This may make it more difficult to safely trap the geese.

When dealing with a gang of geese, special traps are required. Hiring a professional is often a simpler solution to trapping the birds yourself. Be sure to check the laws in your state before attempting to trap geese on your own.

The simplest form of trap is a drop net trap. These are large nets suspended above the ground on four poles. This form of trap can catch an entire gang of geese, but will take a few days to prepare. The water-based version of this trap is difficult to use and should be left to an expert.

You will need to choose a location for the trap near a water source, preferably flat to prevent the geese from crawling out from under the net. Spread some corn or other bird feed for bait daily for several days to acclimate the birds to finding food at this location. Once all of the geese are under the net, you must trigger the trap manually.

Besides using a sheet or net to capture single geese, it is possible to use large sized cage traps. These are not as effective, but a hungry goose may still be captured in one. If you have large a cage left over from trapping other large animals, use corn or bird feed as bait. It may also be best to camouflage the trap to maximize its effectiveness.

At one point, geese had become endangered due to hunting. The population is healthy again, but many states still have regulations limiting or prohibiting the trapping of these birds. If you are living in one of these states, or you simply wish to avoid the hassle of trapping personally, you may choose to hire a professional. There are national directories available listing local wildlife removal experts, one of which is listed at the end of this article.

How to Keep Geese Away

Getting rid of a goose infestation is only a temporary fix. Whether you have recently evicted geese or are on their migration path, it is important to use preventative measures to keep your property goose-free. The less attractive your property is to geese, the less likely they are to invade…

The primary method of discouraging is to simply avoid feeding geese. It is tempting to give food to birds, and visitors to your property may be tempted to do so. However, once geese have determined that a location has food, they are far more likely to return.

Geese desire a safe place for their nests. By allowing the grasses around lakes and ponds to grow, there is a decreased amount of attraction for a goose gang. Tall grasses could harbor predators, and make it more difficult for the geese to find a nesting area close to water. As water is the only safe place for goslings when a predator is nearby, geese are less likely to inhabit an unkempt area. The downside to this tactic is that your property may appear less attractive to people as well. 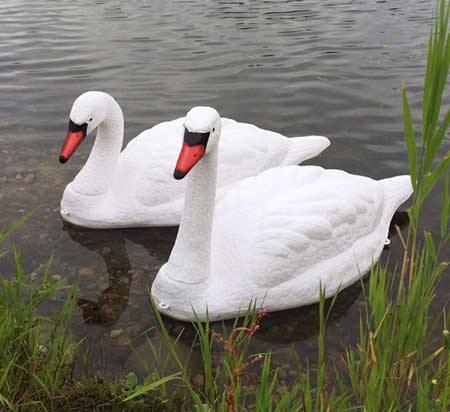 You can easily deter a gang of geese from attempting to nest on your property by placing swan decoys in areas that are attractive nesting grounds. Geese are very protective of their young, and as such, they tend to avoid other bird species with similar aggressive behavior, such as swans. You don’t need to use these decoys outside of migration season. Thus, you may store them away for most of the year.

While geese themselves are not particularly dangerous, they may host bacteria and parasites which post a health risk in humans. These may be transferred through contact in some cases, but are most often transmitted through fouled water or feces. Four of the most common health risks follow:

Escherichia coli bacteria are mostly harmless. However, some strains may cause severe abdominal cramping or pain, diarrhea, nausea, and vomiting. Children, the elderly, and those with compromised immune systems may be at risk of hemolytic uremic syndrome, a life-threatening form of kidney failure.

Cercarial dermatitis, more commonly known as swimmer’s itch, is a rash caused by an allergic reaction to microscopic parasites. These parasites live in the bloodstreams of waterfowl and other animals that live beside bodies of water, and are transmitted through feces. They then burrow into the skin of humans and animals which swim in the infected water. While not able to survive in a human host, the itchy rash may cause discomfort for several days.

Bird flu, or avian influenza is similar to the standard flu. It is transmitted through feces and secretions and may infect water or domesticated birds such as chickens. Bird flu often proves resistant to flu vaccines and has a higher risk factor in children and the elderly.

Caused by the parasite cryptosporidium, this infection has numerous symptoms, including:

The primary danger of cryptosporidiosis is diarrhea, which can lead to dehydration. While the infection can dissipate on its own in many cases, it has proven fatal in some extreme cases.

More information on the diseases and parasites carried by geese may be found on the Mayo Clinic’s official website.