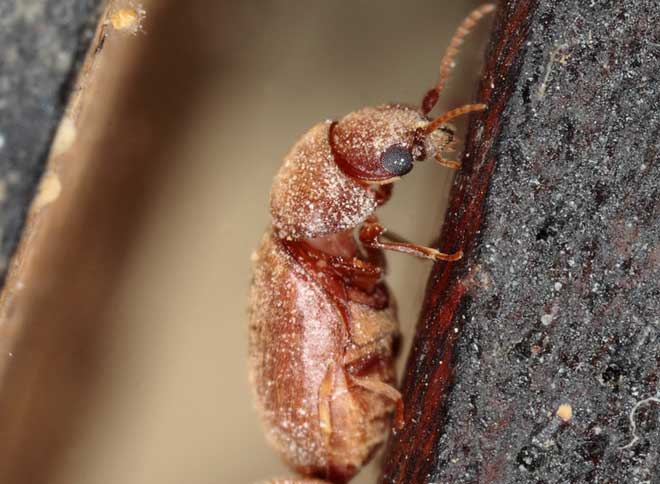 Cigarette beetles are a brown hump-backed beetle whose favorite foods include tobacco, grains, flour, spices, raisins, pasta, and other foods. The fact that cigarette beetles eat chili powder goes to show that they are a voracious pest that can live and thrive on almost any food item. They are some of the worst pantry pests!

These adult beetles are easy to identify because they’re large, dark-colored insects with an arched back. The adults measure about 2-3 mm and tend to be brown in coloration; there’s also a pair of segmented antennae that can bend down from the body like wings (think praying mantis). These nasty bugs look kind of like tiny crows but their bodies aren’t quite as detailed so you’ll know if your insect is actually one or not! Their larvae are hairy, white, and oval-shaped.

They’re known as Lasioderma serricorne (L. serricorne) in the scientific community and they belong to a family known as Anobiidae. They’re also called cigar beetles and their appearance often gets confused with drugstore beetles.

The name comes from their origins of eating tobacco goods, similar to other beetles like the larder beetle, which also feeds on tobacco storage and plants.

Finding Dead Beetles Means You Have a Breeding Population

After a cigarette beetle lays their eggs, they will die. If you are finding a lot of dead beetles around your home and you haven’t sprayed anything, then this is a sign that you have a much larger problem looming ahead if you don’t take immediate action to control it.  This could lead to cigarette beetle infestation.

Cleaning Habits Count for a Lot

Alas, we live in a busy world where there is just so much going with work, school, family, etc. that cleaning up can get overlooked until you start noticing pests around your home.

If you are having a bug problem then cleaning up the house thoroughly should be a priority. This can be a big undertaking especially if you have a larger home or just a lot of personal items in general.

One of the first steps in a major cleanup is to go through and get rid of items that you have no use for anymore. We all have items that mean something to us, but even this can get out of hand if it is not organized or stored properly. Plastic totes are cheap and available at any Dollar Store, Wal-Mart, or home improvement store. These totes can be used to store things that you can’t let go of but don’t want to be damaged.

Charitable organizations will take used items that are good enough to resell. Don’t waste their time with worn out items. Throw away or recycle anything that doesn’t have some use left. Clothing shouldn’t have holes or tears. 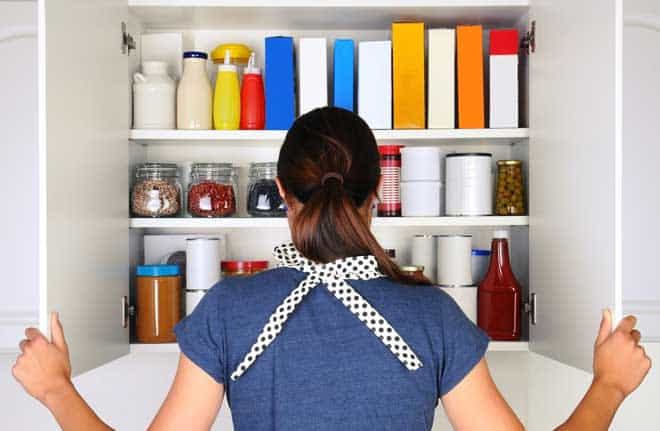 Spice jars should have lids that totally seal. If you live in a household where two-piece lids often get forgotten off of spices, then go for jars where you can twist or untwist to seal.

To help keep these pantry pests away, flour, cornmeal, hot cereals, grits, and other grain-based foods all should be in either plastic or glass that is completely sealable. Larger quantities should be stored in bins that have screw lids or other ways of making them airtight. You might use moisture absorbers or similar for long term storage.

Cigarette beetles will, unfortunately, feed on books and bindings. If you have books you care about and notice cigarette beetles in your home then you would do well to check your books for signs of damage. Then put them in a sealed container until you have a chance to mitigate the problem in the rest of your home.

Upholstery Is at Stake 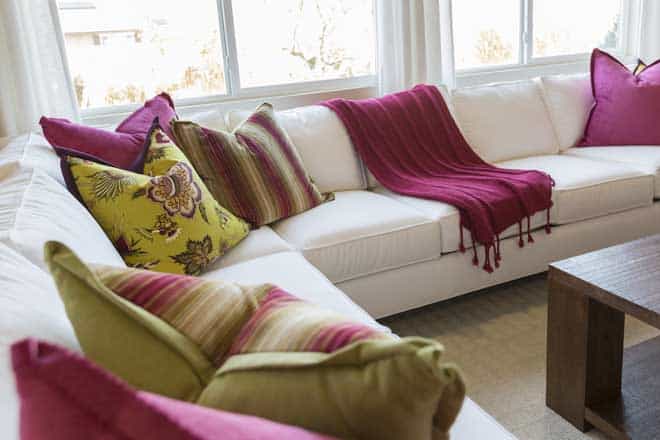 That nice couch you bought last year could be hosting a plethora of cigarette beetles. These beetles are attracted to the stuffing inside of your couch. It can be hard to do anything about this besides spraying your couch with insecticide.

It is best to put your furniture outside when you do this. Do it on a sunny day or in a covered space in case of rain. You need good ventilation. After spraying, you may even want to set up fans to help air it out and eliminate any odors from the chemicals.

If you can replace the inner cushions or stuffing of a sofa, chair, etc. then you might just want to go ahead and try to do that. It can be a lot easier and less toxic of a solution then a lot of sprays.

Vinegar or Lysol spray can be effective in some cases. If something is infested and not in really good condition, otherwise you may want to consider just getting rid of the piece and replacing it with another once you are sure your home is free of cigarette beetles.

Be Vigilant with Vacuuming

A lot of people underestimate how much vacuuming can help with eliminating bugs. For major insect problems, a Shop Vac may pack more power. It often has a longer hose so you can reach a lot of places in your home. You can get a soft brush attachment for dusting and vacuum more delicate surfaces. Start your cigarette beetle eradication plan by first vacuuming every surface you can in your home both inside and out.

If you have a big house, you might want to borrow a friend’s vacuum so two people can take on the job. Make sure to be as thorough as possible. You may be able to get rid of beetles without doing much besides vacuuming, cleaning up, and improving food storage.

Pet food bags that just get a clip put on them are not sealed enough to prevent bugs. Plastic bins or garbage cans with a lid are ideal for storing pet foods. Be careful about spillage around feeding areas or the bins themselves because it does not take much spilled food to cause a problem with insects. Vacuuming areas occasionally will help in a big way and make sure you don’t miss something like when merely sweeping.

If you don’t discover beetles in arrangements, then you can seal them in plastic to prevent infestation until you have a beetle free home.

Just as the name implies, cigarette beetle adults are very attracted to tobacco. These beetles are a bane on tobacco warehouses and manufacturing facilities. If you or a family member smokes, even if it is outside, be sure to throw out cigarette or cigar butts regularly. Cigars should be stored in a humidor or at least a completely sealed container rather than just being left out in the open. Plus, no one wants to be looking forward to a cigar only to find that nasty beetles have devoured it.

Beware of Used Furniture and Other Goods

While you can get a great deal on used furniture and antiques, you should clean items well before bringing them into your home. Cigarette beetles are not going to be visible if they are living in the stuffing of a couch or chair. Dolls and stuffed animals can also be harboring cigarette beetles. Wood furniture is usually nothing to worry about because there is nothing that the cigarette beetles like about wood furniture.

Using heat or cold to kill cigarette beetles is not an effective overall solution. These beetles can survive year round so you cannot expect them to go away as the seasons change. It simply won’t happen. If you want to get rid of cigarette beetles, you are going to have to do many different things around your home. Then you have to maintain a clean space, especially in food preparation and pantry areas.

Put in Screens and Replace Damaged Ones

Screens can easily get overlooked, but they are one of the most common methods of entry for insects and other pests. Screening can be bought in rolls, and you can replace it yourself if you are a bit handy. Nonetheless, you can also take your frames to a home improvement store or window seller and get them to do it for you for a very low cost. If you have a lot of screens to replace then, you should probably leave the re-screening to a professional.

Bags of food and such can be hard to tell if there are any beetles in them or not. If you need to check food stuff for beetles, put all the flour, grain, etc. in a plastic bag in another plastic bag and place in the sun. If there are beetles present, they will surface you will know to discard the food.

Do not feed contaminated food to livestock as they may not eat it and it very likely contains beetle larvae and eggs. Some people go so far as pouring vinegar on flour and other items they suspect are contaminated because this helps prevent the eggs from hatching out somewhere else.

Cigarette Beetles Are Not Hazardous but Require a Quick Response

A female cigarette beetle can lay up to 100 eggs in her life cycle. This means that cigarette beetle populations can soar in no time at all. If you notice a problem, it is crucial to take charge of the situation immediately. Beetles are very good at hiding, so it is very easy to underestimate the true population of beetles in and around your home.

Beetles don’t require much of a hole to enter your home. In fact, something that is barely perceptible to the eye is enough in many cases. Keep in mind that a lot of cigarette beetles find their way into the home via objects or people. It is still a good idea, in general, to seal up your home. This is to prevent all types of pests from entering it and causing discomfort and damage.

Basic caulk or spray foam insulation can be used for most gaps and cracks. Concrete cracks or similar can be patched using special mixes available at hardware stores. You can get pre-mixed concrete patch or mix up your using topping mix. Any flat piece of wood or trowel will work for patching most concrete cracks. Of course, if you notice too much in the way of cracks then you might want to take a look at the structural integrity of your home.

If you have a lot of carpeting in your home, then you will have to pay special attention to cleaning to remove cigarette beetle larvae, eggs, and mature beetles from your home entirely. Carpeting can be beautiful, but it is amazing how much dirt, dander, and bug stuff can accumulate in it. Carpet should be shampooed or steam cleaned and then maintained by consistent vacuuming to prevent problems from reoccurring.

Art Work Can Be Destroyed

If you have canvas paintings on your walls, then cigarette beetles could do a lot of damage because they love to eat canvas. If you discover beetles in your home be sure to check your artwork well for any signs. Seal artwork away if possible until you get rid of the beetles.

If you like to paint in your spare time, then be sure to store canvas where insects cannot get to it. If you find any canvas with beetles, you should consider just throwing it out because it is likely already damaged.

Professional Help of Getting Rid of Cigarettes Beetles

After cleaning if you feel that you are not able to or that spraying your home is just too much of a job, you can call a professional exterminator who will treat all areas of your home. This doesn’t mean that you don’t need to get into better habits and take action to prevent the problem from coming back. Chemicals are a short term not long term solution.

LOOKING TO HIRE AN EXTERMINATOR…CLICK HERE?!