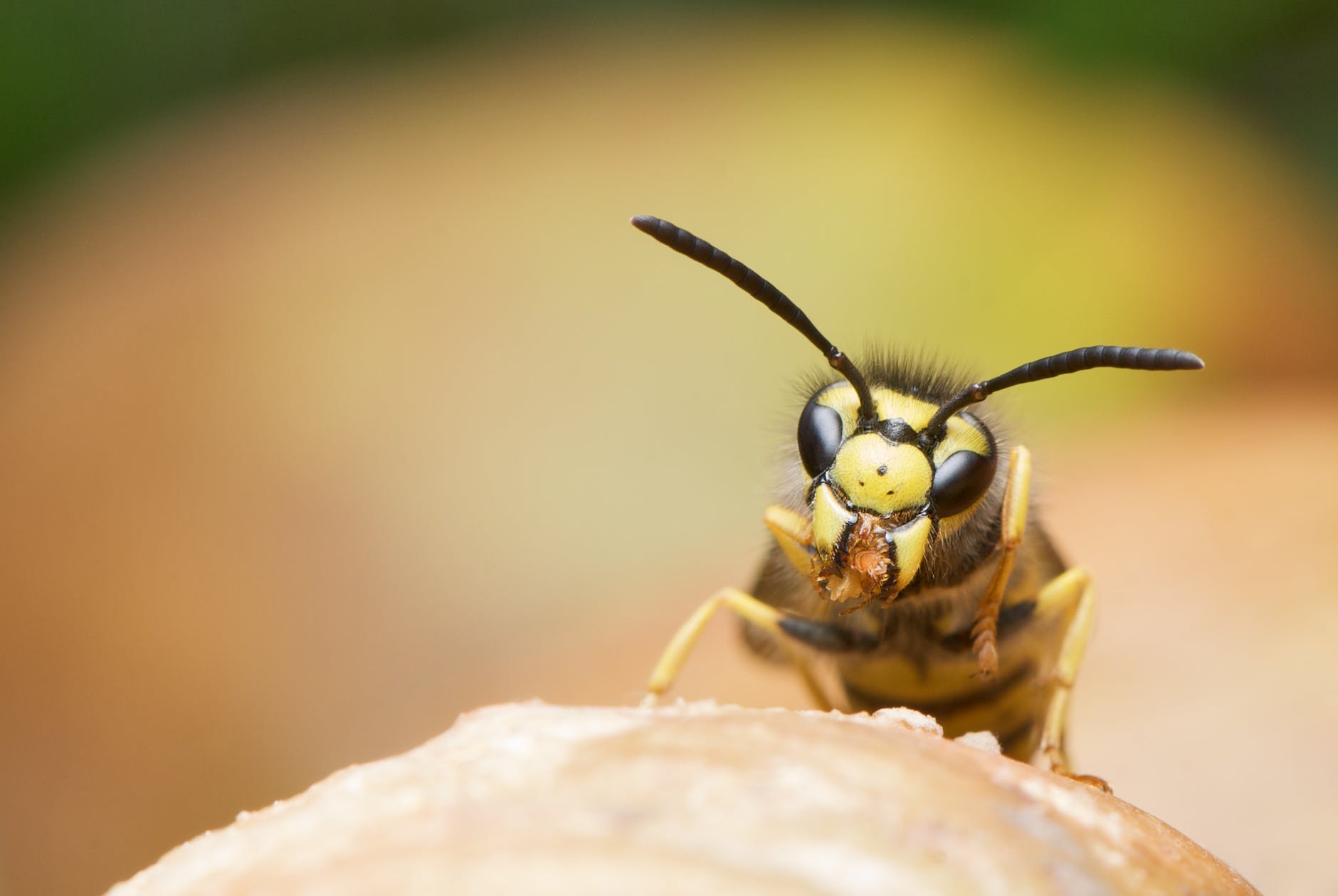 Wasps can be a nuisance if they swarm on your property.

Many homeowners are interested in trying to get rid of these creatures, as they can negatively impact your peace of mind.

In this article, five common types of wasps are examined in greater depth. Then, five techniques for getting rid of them are discussed, followed by some final thoughts on wasps.

In this section, five common species of wasps are discussed in detail.

Yellowjacket wasps are eusocial creatures, which means they live in a nest with a queen wasp and non-reproducing workers.

The queen wasp is responsible for laying eggs and emerges between late February and early April. The queen feeds the larvae for about 3 weeks, at which point they are considered to be adult yellowjackets.

A colony of these wasps can consist of more than 1000 worker wasps. All these workers are sterile females.

These types of wasps are known to be aggressive and will sting if they feel threatened.

Paper wasps are known for their black belly with distinct yellow markings.

Although they are not as aggressive as yellowjackets, their sting can cause allergic reactions.

When the weather cools down, male wasps and worker wasps die, and fertile female wasps attempt to find another shelter. These wasps like to build their nests in very sheltered, dark places.

Mud Dauber wasps love to paralyze spiders to provide sustenance for their young. This unique technique preserves the body of the spider until the offspring are ready to eat it. This method also prevents significant harm to the adult wasp and offspring.

These types of wasps are solitary creatures. This means that their lives consist of preparing nests and preying on food for their offspring.

Their nests contain many cells that are sealed off using mud. Each cell contains spiders as well as a single egg.

These kinds of wasps donâ€™t sting often. Many people even consider their presence beneficial, as they can be effective at keeping pest populations in check.

Bald-faced hornets are unique for having black bodies with white markings on their face.

In order to make the nest, the queen wasp chews cellulose that has been obtained from rotting wood. Chewing the cellulose turns it into a paper-like material that is ideal for constructing a nest.

These nets can reach 2 feet in height. These wasps tend to prefer warmer weather. They can be found all over North America and are considered aggressive.

These creatures can spray venom from their stingers, allowing them to repel any nest intruders. This venom can cause temporary blindness.

Cuckoo wasps are unique for laying eggs in the nests of other wasps.

They are also known for being quite small, as they are not much larger than a housefly. They have metallic colors that are produced through structural coloration.

These kinds of wasps inhabit the desert regions of the world.

One of their distinguishing features is that they can roll up into a ball when they are being attacked.

Five Techniques For Getting Rid Of Wasps 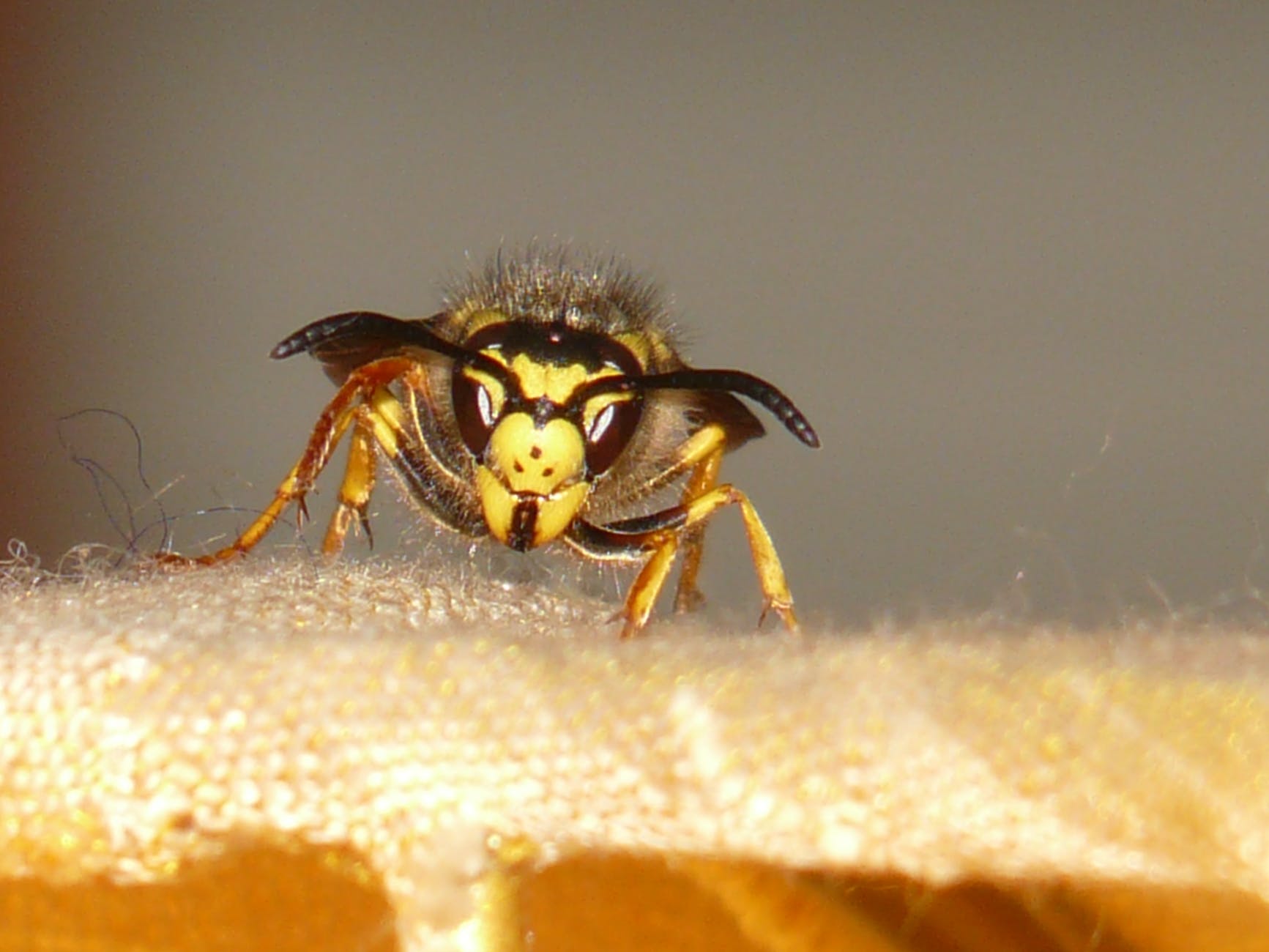 In this section, five effective techniques for getting rid of wasps are discussed.

One of the most powerful ways of removing wasps is to use an insecticide.

Many insecticides can be found on Amazon. Many local shops will also carry these products, including places like Target, Ace Hardware, and Home Depot

When using an insecticide, make sure you spray the entire area, as this will expedite the process. If you miss a spot, then remaining wasps might try to form a new colony in this location.

If you have a wasp infestation, then it might be beneficial to buy insecticide in bulk. This is the most cost-effective option and ensures that you have a constant supply of the product.

Some store-bought insecticides contain dangerous chemicals that are not ideal for use around pets and young children. If you have sensitive individuals in your household, then you should consider buying a more natural insecticide made from safer ingredients.

Alternatively, many homeowners like to make their own insecticide. This can be done by combining water and dish soap and putting the mixture in a spray bottle. Some people even add peppermint oil, as this is known to be effective when eliminating wasps.

Another great way to get rid of wasps is to make a trap.

There are many ways to do this. One of the simplest is to mix water, sugar, and some kind of poison like borax. Then, you leave this mixture out in a jar to bait the wasps. They should be attracted to the sweet smell, but the ingestion of the poison will lead to their quick demise.

The wasps might also bring some of the mixture back to their nest to feed the queen and offspring. In this sense, setting a trap could allow you to target most of the colony, making this an effective solution.

Itâ€™s best to set this trap near the wasp nest. If you donâ€™t know where the nest is, then you should place it near where existing wasps are hanging out.

If you want to avoid using a poisonous chemical like borax, then you can just mix water and sugar. Then, you can pour the mixture into some kind of container that has a narrow opening. This opening should be just large enough to allow the wasps to enter.

The wasps will be attracted to sugar substance but will be unable to get out of the bottle. You can make this method even more effective by putting cooking oil along the edges of the opening. This will cause the wasps to slip and fall into the mixture. 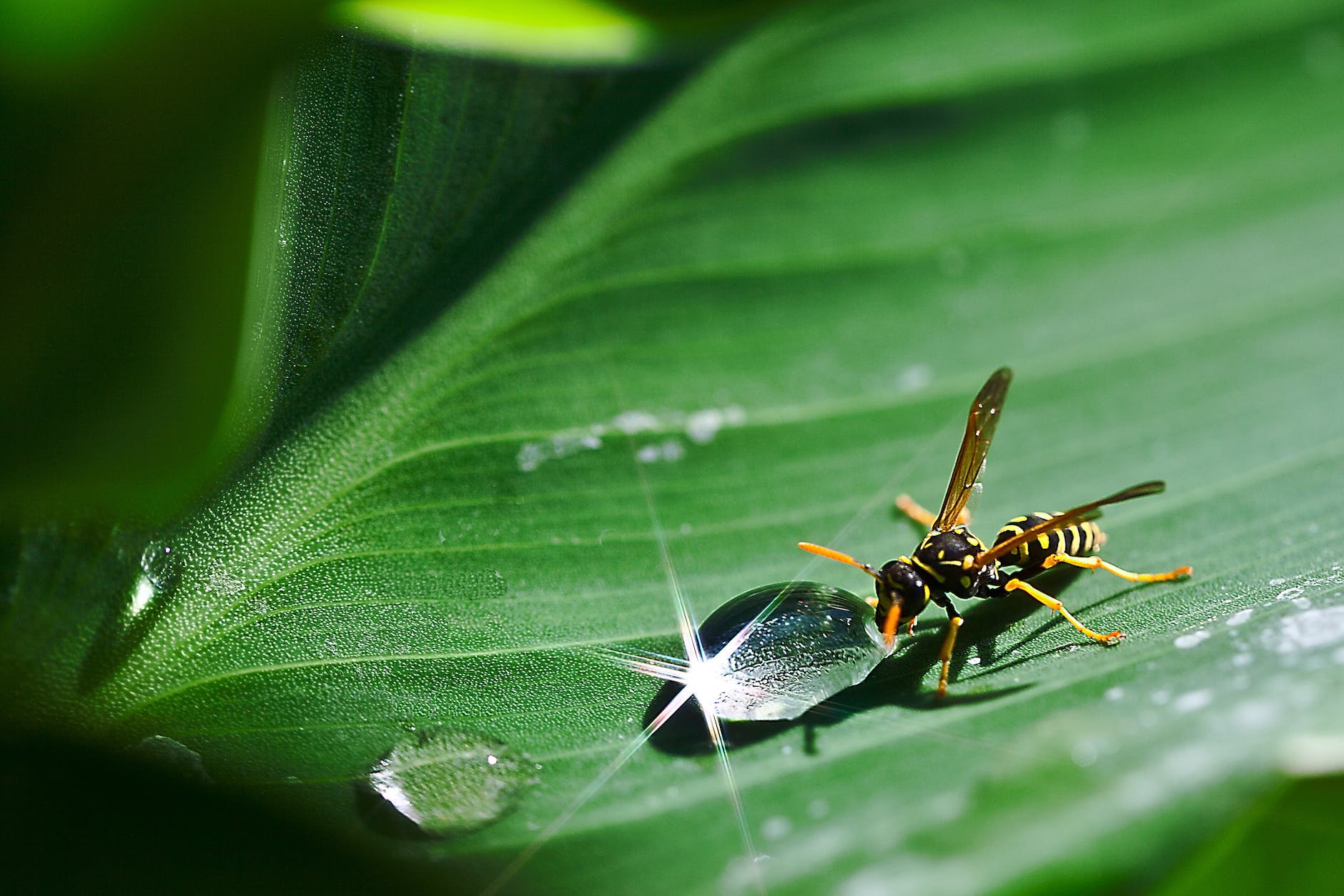 â€‹â€‹â€‹â€‹â€‹â€‹â€‹One of the best ways to get rid of wasps is to properly maintain your home. While this wonâ€™t kill existing wasps, it will prevent future ones from getting inside and impacting your peace of mind.

When maintaining your home, you should check for vulnerable points of entry like broken windows or cracks in walls. These are places where wasps are likely to enter.

Also, you should try to minimize locations on your property where wasps are likely to build nests. This depends on the type of wasp, though many prefer locations near sweet substances. Common sites for building nests include places near trash cans, pet food, and even burrows in the ground.

To prevent wasps from forming nests in burrows, you can just cover the hole with dirt. Making sure trash cans are covered and the food is put away will also be effective in preventing wasps from building a nest on your premises.

4. Enlist The Help Of Another

This is certainly an effective strategy even if it’s costly. Some professionals charge as much as $100 per hour, making this approach not ideal if you are on a strict budget.

If you need the help of someone else but donâ€™t have the funds, then you can always talk to family members, friends, or neighbors. You might even be able to exchange some good or service for someoneâ€™s help.

For example, you could offer to mow someoneâ€™s yard in exchange for their wasp extermination services. 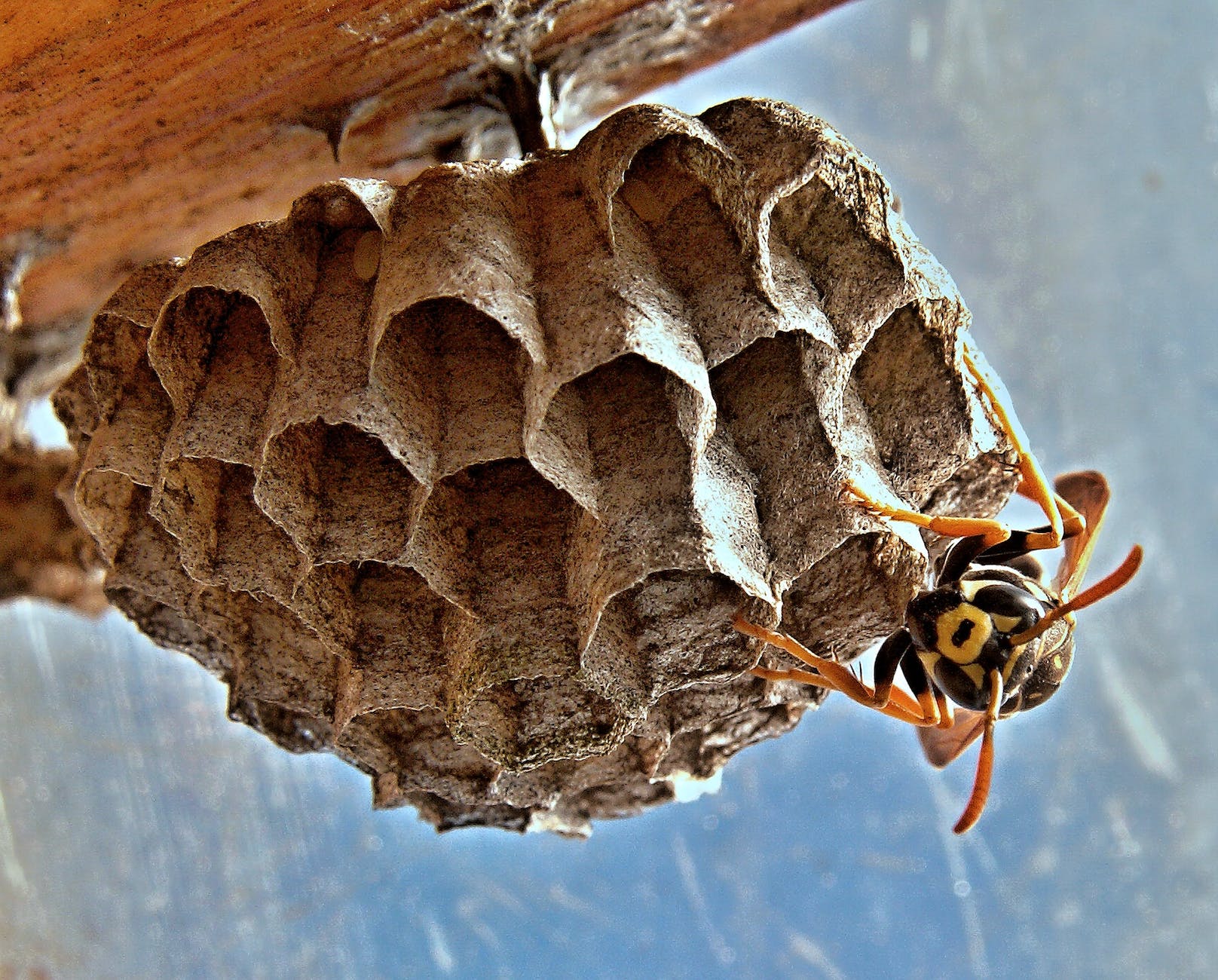 Wasps are fascinating creatures, though they can be a nuisance if they invade your home.

If you want to remove these creatures from your home, then using an insecticide or home-made trap would be very effective. Alternatively, enlisting the help of someone else might be ideal if you are inexperienced.

Lastly, making sure your home is clean and well-maintained is effective when trying to control a wasp population. This minimizes the likelihood that wasps will form nests near where you live, allowing you to keep your home free of these creatures.