Bug zappers don’t work. All they do is light up the backyard and make a buzzing noise when a bug gets curious about the light. Carbon dioxide is the thing that really attracts bugs. There are devices that use carbon dioxide as an attractant and don’t make annoying buzzing noises, like the innovative Dynatrap. 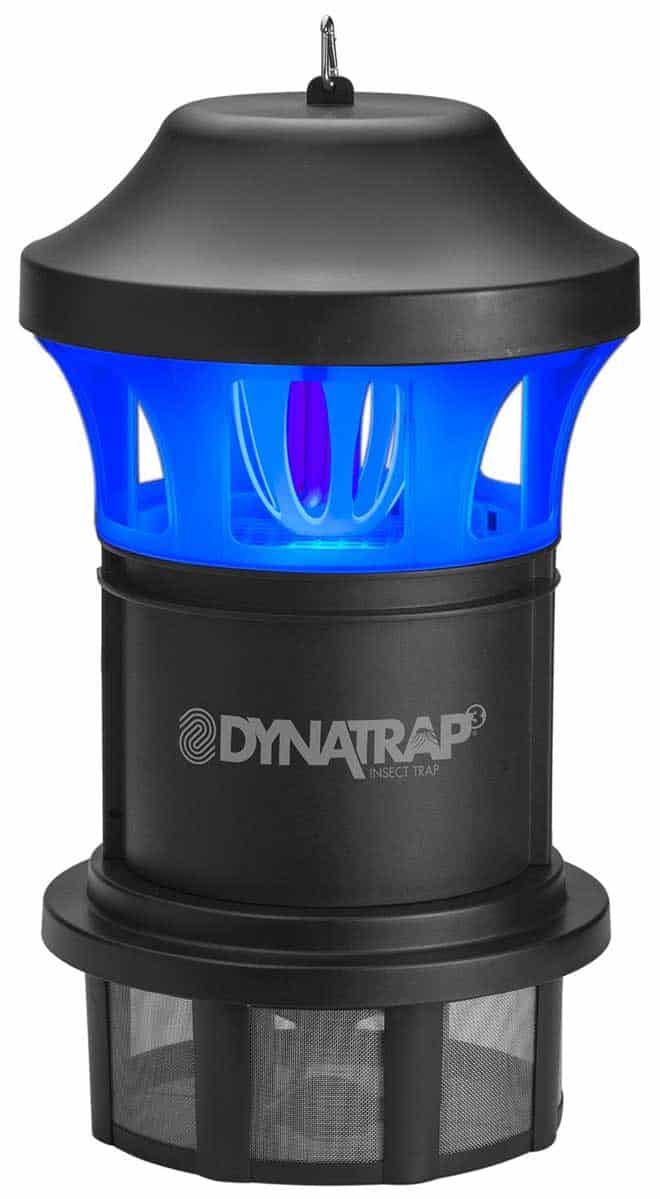 The DynaTrap uses no sprays nor zapping. It just traps the bugs that fly into the device. Depending on the model, it can protect from 300 sq ft. up to an acre of property without any pesticides nor odor. The ultraviolet bulb can last 3,000 hours and is easy to replace.

With the DynaTrap, homeowners can enjoy backyard activities without having to douse themselves in bug spray or light tiki torches every four feet. The citronella oil in torches only keeps the bugs away, it does not kill them. While your backyard might take on a Tiki-Island-Adventure vibe, it also might get kind of hot sitting under a bunch of torches in the summer. Fires in the backyard are illegal in many communities, so no flaming trashcans.

The trap comes with a 10-foot power cord and can be left on all the time. It definitely will not keep anyone awake at night. Users report the DynaTrap is effective even when the bulb is not engaged. This goes back to the idea that bug zappers do not work against mosquitoes because they are not attracted to the UV light. Only occasionally does a mosquito get near a bug zapper, as Debbie Hadley of About.com explains. Female mosquitoes want blood and they find it by following the scent of carbon dioxide. There are other attractants such as sweat, body odor and perfume, but CO2 is the main one.

The retaining cage on the DynaTrap is easy to remove and clean. For those homeowners who live in areas with extra heavy concentrations of bugs, there is a large-capacity net they can use to upgrade the unit. Many users report the unit lasting at least three years. Maintenance is simple and inexpensive.

Every year it seems mosquitoes are spreading a new disease to humans. Recently, the Zika virus emerged. The disease can cause mild symptoms in adults, but it can lead to nerve damage. Zika also can lead to deformities in babies. The virus currently is spreading across Texas, Arizona and California, Seema Yasmin of The Dallas Morning News reports.

Don’t forget about the West Nile virus. It’s still around. Recently, officials reported signs of the disease in California, Vannessa Maravilla of KCRA reported. The disease can cause fever and brain infections. Many of the people who survive brain infections suffer permanent memory loss and other neurological problems.

Other diseases mosquitoes can transmit to humans include

Now, is a good time to invest in a good bug trap. A vaccine for Zika is not expected until 2018, at the earliest, says Jon Cohen of Science Magazine. Besides a bug trap, homeowners would be wise to eliminate breeding environments for mosquitoes such as pools of water, piles of leaves and cracks in the exterior of a home.

Some bug solutions can have harmful effects on humans. Pest strips are pretty gross-looking, but they have DDVP, which is an effective chemical for killing bugs with vapor. It has a strong smell. Pest strips are not meant for enclosed spaces. The Centers for Disease Control says people should not even let the DDVP touch their skin, Gwen Pearson of Wired reports. 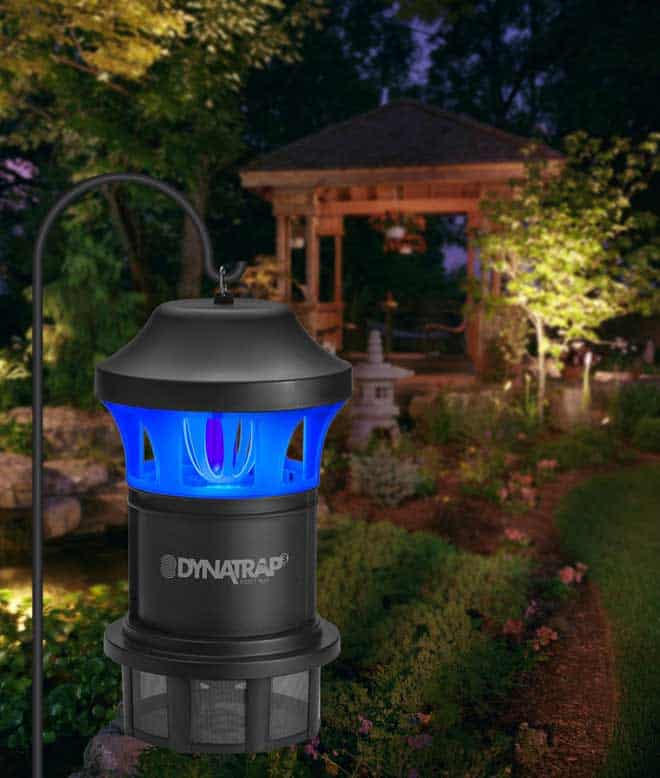 The DynaTrap uses a UV light to attract bugs, but it is the special coating on a disc inside the device that produces carbon dioxide. Mosquitoes and other biting insects can detect CO2 from yards away. That’s how female mosquitoes find humans to bite in the dark. Depending on a person’s perspective, another benefit is the DynaTrap also attracts bees and other stinging insects.

After the bugs get close enough to the DynaTrap, the fan in the unit sucks the bugs into the trap. The fan is very quiet. There is no electrocution like in a bug zapper. There also is no burning smell. The retaining cage is see-through, so homeowners will know when to empty the trap.

The trap is effective in day and night. It is durable enough to operate in the rain. The UV light produces only enough heat to attract bugs. Homeowners can set it up anywhere in the backyard. It is recommended to place it at least three feet off the ground, which shouldn’t be a problem as the units are lightweight.

Compared with a propane bug trap, the DynaTrap is much less expensive to buy and maintain. While effective, some propane models cost more than $300, and owners have to continually refill a separate propane tank to fuel it. The tank is typically the size of those used for outdoor gas grills. Propane-powered traps also require replacement attractant, which is not cheap.

Unlike a noisy bug zapper, DynaTrap owners can use the device indoors as well. You would almost certainly want to avoid doing this with propane traps. DynaTrap users also won’t have to put up with weird-scented candles or use the fireplace in the summer.

The DynaTrap is easy to take apart and put back together. When users brag about cleaning the motor on the unit, that means they cleaned the fan. It’s as simple as a computer fan. Replacing the UV bulb involves one screw. With such as simple design, it’s no wonder why the trap lasts so long and can withstand wet weather.

There are not many drawbacks to the DynaTrap. In some situations, the trap may catch a lot of beneficial bugs along with mosquitoes. The trap does not instantly kill the bugs it traps. They die from starvation and dehydration.

There is a chance all the bugs may not be dead when the owner removes the retaining cage to clean it. A few bugs will either get away or bite the owner. One solution to this problem is to partially cover the trap with a plastic bag and blast the inside with a blow dryer as Michael Krailo demonstrated in a video. This may seem like a lot of work. A more patient DyanTrap owner might buy an extra retaining cage, so he can pull the filled cage from the trap, cover it and insert the extra cage into the trap. That way, he can just wait out the bugs instead of holding a blow dryer on them for several minutes.

If an owner wants to place the DynaTrap far from the house, he will need a very long extension cord. The unit can operate in the rain, but water can collect in the retaining cage. There are some DynaTrap models that have a built-in moat. The owner can fill the moat, and mosquitoes will try to use it as a standing water nest. Before the mosquitoes can nest, the fan on the trap will suck them into the retaining cage.

Chances are owners will figure out they need to hang the DynaTrap in a sheltered location near a place where mosquitoes populate. To prevent large, non-mosquitoes from getting into the trap, owners can add mesh to the openings. One way to increase the effectiveness of the trap is to add attractants to the device. As long as the attractant has octenol in it, the product should work. Some companies market octenol as an additive to bug zappers. This may be further proof that UV lights don’t do much for female mosquitoes.

The UV lights for the DynaTrap are not inexpensive to replace, but they cost less than propane. Owners probably will develop their own technique for covering the retaining cage when they remove it from the trap to empty out the dead bugs.

One final drawback to the DynaTrap is the lack of satisfaction owners receive from hearing bugs sizzle in a bug zapper. Remember, the zappers are mostly just killing moths because they are attracted to light. Chances are the DynaTrap is going to have a higher trap rate at night for a similar reason. Those looking to give bugs a quick death may be disappointed with the DynaTrap’s passive kill method.

To kill a lot of bugs, homeowners need a solution that works and produces the least amount of hassle. Zapping is not the answer, neither are scented torches. It’s hard to argue against science and the effectiveness of carbon dioxide. A little attractant and a quiet vacuum can do a lot.