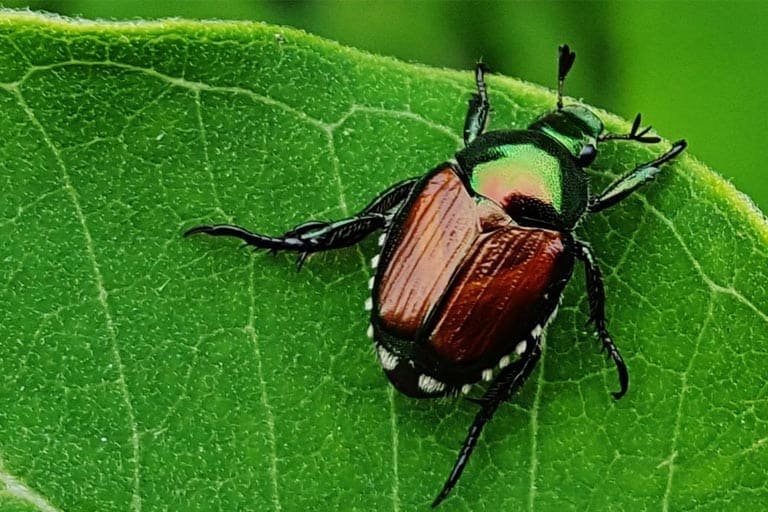 If there’s one thing every gardener loathes, it’s a pest. Especially the kind that is both destructive and difficult to control.

The Japanese beetle is a perfect example.

Don’t be fooled by its attractive colors, this bug is so destructive it can ruin your entire garden. And that is why it is important that you know how to get rid of Japanese beetles. Japanese beetles are a pest that can do significant damage to your lawn. They feed on many of the same plants you have growing in yours and their feeding leaves behind lacy skeletons, making them easy-to destroy pests! Here we list some ways for getting rid of these pesky bugs:

But what exactly is this pest and how did it find itself on American soil?

Getting Acquainted with the Japanese Beetle 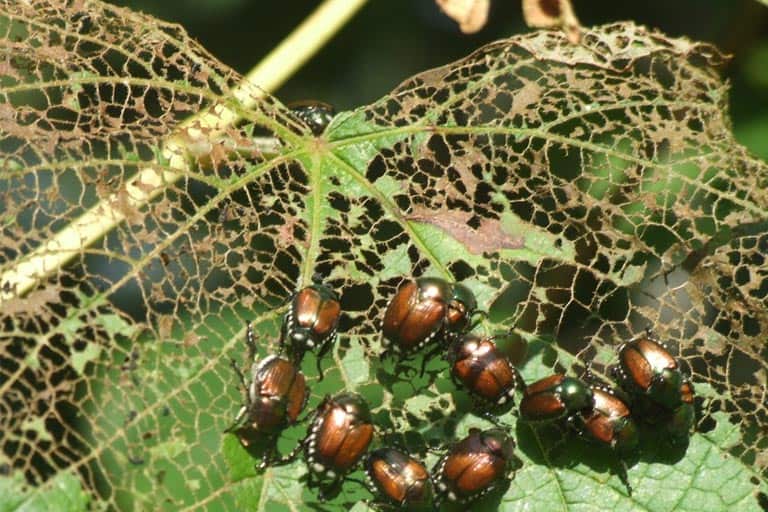 Japanese beetles are a small invasive species of bugs that carry a big threat to plant life. That’s because japanese beetles eat most kinds of plants from your rose bush to your grapevine.

While Japanese beetles are one of the biggest threats to crops in the Eastern and Midwestern United States, they are a relatively new species in the region.

Before finding its way to the Americas, the Japanese beetle was mainly confined to the islands of Japan. It was kept in check by its natural predators and isolated by the large bodies of water surrounding the islands.

Unfortunately, all that changed in the 1900s when, despite laws against it, people brought in plants rooted in soil. It is believed that the Japanese beetle entered America as grubs in the soil. The Japanese beetle population exploded, and all early efforts to keep them in check were dropped. It was just too prolific of a breeder to keep up with. 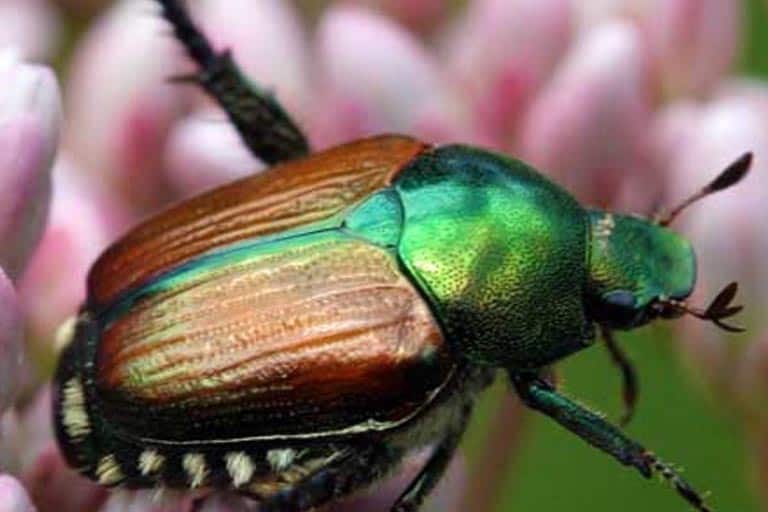 Japanese Beetles are easy to identify, thanks to their unique colors. They feature metallic blue-green heads, copper backs, and tan wings. They also have small white hairs lining each side of the abdomen. These are distinctive color patterns you won’t find in any other beetle. Japanese beetles like to move and feed in small groups, making them a bigger danger to your plants. Some people have reported that extremely large infestations, which defoliate a plant or tree completely, may wind up killing the plant. 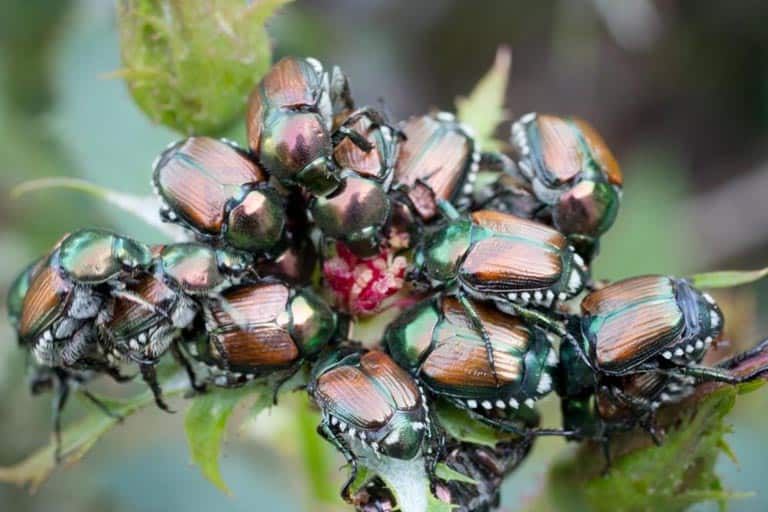 In order to know how to get rid of Japanese beetles, you not only have to be able to identify them, but you’ll also need to understand their breeding cycle.

Japanese beetles lay their eggs in the soil, usually in June. The eggs then develop into white Japanese beetle grubs that have brown heads, 6 legs, and reaching sizes of up to ¾ inch in length.

They will then emerge from the soil around June as adult beetles and continue feeding on your plants, this time on the leaves, bulbs, and flowers. For the next 40 days or so, the only thing the Japanese beetle will do is feed and mate.

Because of their destructive nature, different types of traps have been invented specifically to capture Japanese beetles. These usually comprise a pair of crossed walls and a bag or plastic container underneath to capture the beetles. These traps are baited with a floral scent, pheromone, and sometimes both.

The problem with most of these traps is that they attract a lot of Japanese beetles, even those from afar off.  You don’t want to end up with a Japanese Beetle infestation.  So you can use these bag traps with Donaldson Farms Japanese Beetle Trap attractant oil to get as many of the destructive beetles trapped. It will be a great thing if all those Japanese beetles ended up in the bag traps.

Unfortunately, most of the beetles end up on the plants near the trap. This ultimately means more damage to your precious plants in your garden than how it would have been done without the trap.

Does this mean you do away with the trap then? Not at all. Read on and you’ll see how to get rid of and attract Japanese beetles using traps in conjunction with other methods.

LOOKING TO HIRE AN EXTERMINATOR…CLICK HERE?!

DIY Traps For Getting Rid of Japanese Beetles 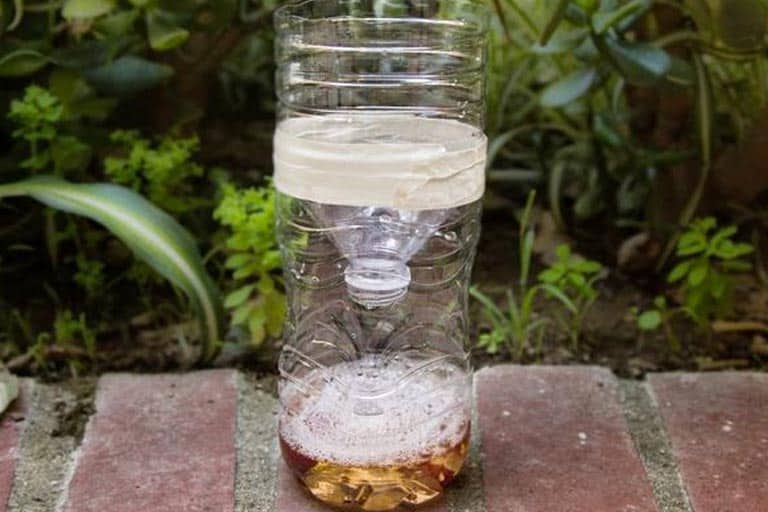 You can also make your own DIY Japanese beetle traps using a fruit to eliminate Japanese beetles. To do this, simply open a can of fruit cocktail and let it sit for a week so that it can ferment. Get a light-colored pail and use some bricks to create an elevated platform upon which you will place the fermented mix. Next, fill the container with water until it barely reaches the top.

Like the commercial traps, this trap will attract the Japanese beetle. When it comes to feeding on the fruit cocktail, it will fall into the water and drown.

The advantage with this trap is that the beetles will head for the can, and the pail will give them more room to land near the bait, therefore increasing the chance of the beetles being captured.

Use Their Greed Against Them 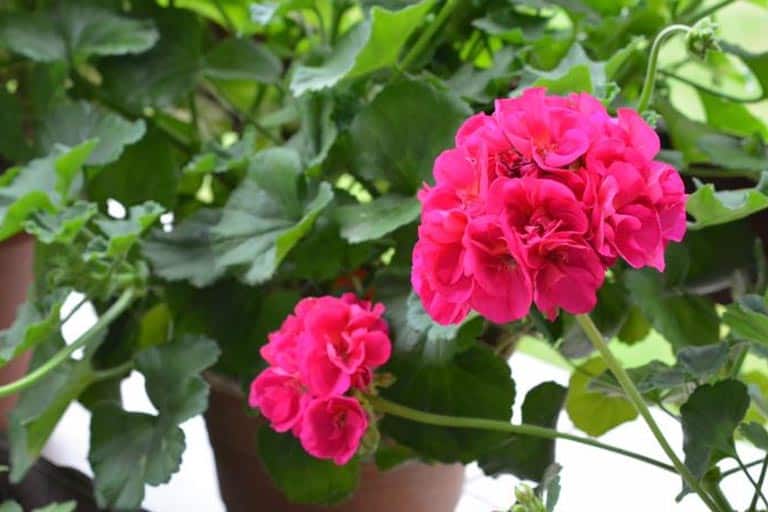 As already mentioned, Japanese beetles feed on many plant species. One of their favorites are geraniums, particularly the blossoms. Unfortunately for them though, geraniums are an intoxicant for them. Once they eat them, they get dizzy and fall off the plants, allowing you to easily collect them and dispose of them.

This means by planting geraniums close to your valuable plants and fruit trees, you can actually reduce the damage that Japanese beetles can cause on them. You can also plant geraniums around your beetle traps in order to make the traps more efficient. The trap will attract and capture some beetles while the geraniums will incapacitate the ones that escape the trap.

Spray Your lawn with a Soap Solution

Japanese beetle larvae have been observed feeding on roots at depths of 10 inches below ground level! Japanese beetles are known to feed on over 300 species of plants, including Japanese black pine. Japanese beetle adults also eat the leaves of trees and other areas where they can reach them, so it’s important to take measures early before your prized plant is damaged beyond repair

Spraying soapy water around the affected trees and on nearby grass is one way to get rid of grubs. Fill a spray bottle with soapy water or a bucket of soapy water (dish soap works well, we also suggest Safer Brands concentrate, but any kind will do) and spray liberally every few days until you notice fewer bugs or no more bug activity in your yard or garden area.

For this method, dilute 2 tablespoons of liquid dishwashing soap in 1 gallon of water to use per 1,000 square feet. Spray the lawn with this solution. This will force the grubs to come to the surface where the birds will quickly swoop down on them and have themselves a good feast. Do this at least once a week until no more grubs surface.

Use Milky Spore While Japanese Beetles Are In Larva Stage 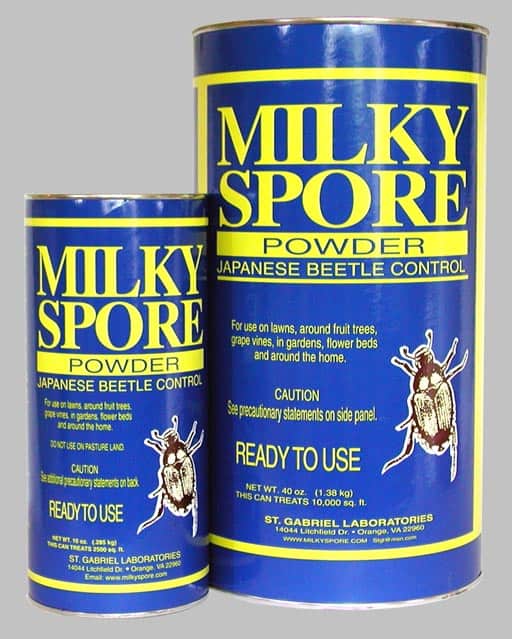 During the larvae stage, the Japanese beetle is very susceptible to a disease called milky spore disease. To get rid of the larvae, you can introduce this fungal disease into your lawn to help kill them off. The larvae will ingest the spores as they feed in the soil and get mortally sick.

However, for this method to be effective, the spore count must be up for 2 to 3 years. The good news is that the spores remain viable in the soil for many years. The bad news is that this is an expensive treatment, as you will have to treat the soil within a 5/8th of a mile radius for good control.

Employ the Use of Nematodes 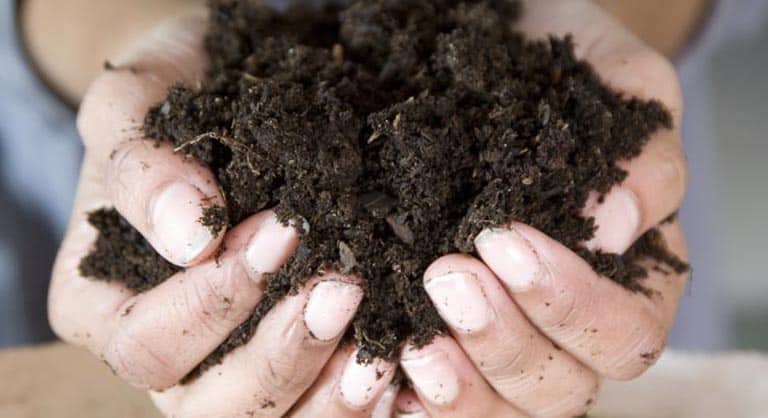 Nematodes are a parasitic type of worm that you can introduce to your soil when the grubs are small. These help control the larvae population. This method works best when the lawn is irrigated before and after application.

Because of the hardy nature of the Japanese beetle, fighting it requires that you have a good strategy in place. This means you can’t rely on one type of control method if you want to win the battle. More often than not, you will have to use a combination of the methods outlined above in order to see effective results.

Whether you see immediate results or not, you will have to be patient and as resilient as the Japanese beetle itself. Failure to do so will result in your garden being overrun and ultimately destroyed.

If you are facing an infestation, know that this is war, and in a war, you do whatever it takes to win. So, go out there, set your different types of traps and engage the beetles until you emerge victorious.